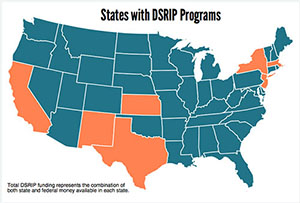 What they can come to a consensus on is the goal. As the health care industry increasingly shifts toward a system that aligns quality and value with reimbursement incentives and financial penalties, some hospitals and systems are struggling to keep up. They may lack the resources necessary to implement the kinds of changes that further the Triple Aim—a concept introduced by former Center for Medicare and Medicaid Services (CMS) Administrator Donald Berwick—that calls for improved population health, enhanced patient experiences and outcomes, and reduced costs of care.

Failing to meet those aims could put a hospital at risk of losing patients, and therefore revenue, as patients choose to visit other better-performing providers. And without the funds or personnel to make investments that improve operations and outcomes, poor-performing hospitals also become subject to CMS penalties under programs designed to reduce healthcare-acquired infections or 30-day readmissions.

The financial challenges create a vicious cycle, and more often than not, the hospitals caught on this merry-go-round are those serving high volumes of uninsured or Medicaid patients. So how do these facilities balance what is typically considered a safety net role with the pursuit of delivery-system reforms?

That is where the DSRIP program comes in, at least in the seven states that have currently adopted the initiative. California was the first, and since then, Massachusetts, Texas, Kansas, New Jersey, New Mexico and New York have followed.

Through the federally approved and budget-neutral DSRIP waiver program (part of the larger Medicaid 1115 demonstration waivers), states use local and state money to leverage federal matching funds. That money is then available to participating hospitals and providers. In California, only public hospitals are eligible, whereas in New York, both public and private hospitals can take advantage of the program.

But for any participant to receive the funds—in California, a total of $6.67 billion in state and federal funding over five years—they must achieve certain process-type metrics in the early years of the waiver program and then outcome-based metrics in later years. Each metric or benchmark is facility-specific and spelled out in a custom contract between the hospital and its state, with approval from CMS. Projects are also facility-specific. Certain projects may be required, but others are optional and left up to the choice of the healthcare organization, though they tend to fall under one of four major categories:

An influx of federal funds through the DSRIP program has allowed safety net hospitals to focus on these areas, while at the same time, the investment of state monies and the performance reporting to CMS has made these facilities more accountable for outcomes among their Medicaid and uninsured patients. It may seem like a win-win, but not all critics are convinced of the waiver programs’ effectiveness, which could jeopardize the program going forward.

Last month, California released its Medi-Cal 2020 waiver renewal application to CMS, which contains a proposal to continue the DSRIP in a new form in partnership with both designated public hospitals and district hospitals. Texas is expected to pursue a renewal next year.

For more information about how we can help you design, implement and measure success and ROI for DSRIP projects, please contact: info@copehealthsolutions.com.