Considerations for Extension and/or Renewal of the Texas 1115 Waiver: A Look at Other States

State Medicaid and Other Waiver Programs

The expiration of the Texas 1115 Waiver at the end of September 2022 is a call to action. With the uncertainty surrounding the Texas 1115 Medicaid Waiver renewal, the state’s Health and Human Services Commission may consider some of the policy and regulatory changes to the Medicaid program that the Centers for Medicare and Medicaid Services (CMS) has been promoting, and that other states are working toward. This includes for example the transition to value-based contracting between health plans and providers. By understanding the context of policy trends, evaluating how other large states are preparing for an ever-growing shift toward value-based payment (VBP), and integrating lessons learned and progress achieved through its own DSRIP initiative, Texas can gain insight into how to approach its own waiver extension and/or renewal process.1 Hospitals stand to be especially impacted by what comes of the 1115 Waiver and must adapt to operate sustainably under new funding requirements.

As a key part of its 1115 demonstration waiver, Texas implemented the largest Delivery System Reform and Incentive Payment (DSRIP) program in the nation, serving approximately 12 million Texans, including its population of roughly 5 million uninsured. Over $9 billion, or 68 percent, of DSRIP funds have gone to hospitals, which will have to find new sources of funding when DSRIP dollars end in September of 2021, and additional waiver funding for uncompensated care expires in 2022.2,3

Hospitals and their networks leveraged waiver funds to build value-based care and population health capacity. The sustainability of everything built under the Texas DSRIP program need not rely entirely on the hopes of a Medicaid waiver extension or renewal, but rather focus on a pivot toward more innovative payment and delivery models that mirror emerging care delivery and wellness management innovations for population health. This would build upon lessons learned from waiver funded programs, as well as other similar systems transformation initiatives. The next stage must transition funds flow into market-based payment mechanisms under VBP models. Hospitals with the ability to anticipate and embrace this transition are better positioned to tap into future funding.

One of among several CMS priorities has been implementing new programs and policies to encourage both payors and providers to engage in more aggressive VBP arrangements, while working to align funding requirements across programs in order to drive integration in care delivery. In her November 2019 speech at the National Association of Medicaid Directors, CMS Director Seema Verma urged states to move toward value and increase accountability, stating, “To spark state innovation, we’ve [CMS] supported state-led demonstrations that address social and economic factors, as well as local and emerging health threats.” She further stated, “There will be no new SIM grants, no more open-ended, one-off DSRIP waivers. We must move forward with a more unified, cohesive approach – across payors, across CMS, and across states. Doctors on the front lines need payors to march in lock step together towards common value-based care models.” Director Verma also urged state Medicaid Directors to look for CMS to issue guidance around innovative payment models that help providers ease into higher levels of risk, helping states maximize opportunities for value-based payment in Medicaid through existing authorities.4

Directionally, this is further evident in programs like Medicare Direct Contracting (MDC), which is the next evolution of the Accountable Care Organization (ACO) model. Among its components, MDC offers a bridge between Medicare fee-for-service (FFS) and Medicaid managed care. Through its High Risk Model option, MDC encourages coordination of benefits for high risk members like dually eligible members, enables providers to take capitated risk for aligned qualifying beneficiaries, and encourages coordination of those benefits with the Medicaid managed care coverage for the member. This brings Medicare FFS in deeper alignment with Medicare and Medicaid managed care programs, and reflects CMS commitment to drive coordination across programs for the highest risk members.

Many states have jumped on board with this concept and some, such as New York, are working to create a marketplace in which payors and providers are encouraged and enabled to enter into premium risk transfer agreements for not only Medicaid and Medicare but for all lines of business. California, through its Medi-Cal Healthier California for All (formerly CalAIM) and other initiatives, is increasing its focus on regional population health management, pushing plans to implement population health management strategies and realign complex care management programs to address social determinants of health. Texas, with its vast DSRIP program and extensive lessons learned on how to improve population health has a unique opportunity now to look beyond DSRIP in order to increase alignment with federal priorities and embrace flexible and innovative programs. Hospitals and providers can expect VBP to be a fundamental feature of future policies across lines of business, as more lives are moved into managed care and holistic population health management becomes an expectation of both State and federal programs to access funds.

Waiver Lessons from Other States

Taking a look at the focus areas of New York and California, two other large states working through their next steps after having had 1115 Waivers with DSRIP programs, as well as new programs coming out of CMS such as Medicare Direct Contracting, may shed light for Texas payors and providers on what to expect as Texas begins discussions with CMS on a potential 1115 Medicaid Waiver extension or renewal. Some of these components are highlighted below: 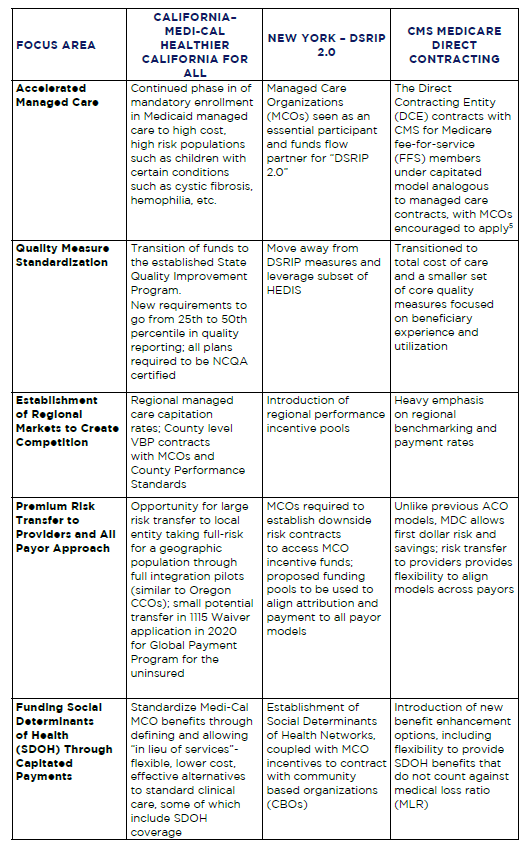 While it is uncertain what will happen with California and New York’s efforts to secure another waiver, other states such as Minnesota and North Carolina have successfully secured 1115 waivers for systemic reform. The theme across both proposed and successful waivers is the prospect of innovative approaches to community level reform that embraces managed care principles and whole person care. Texas, in its DSRIP renewal in 2017, has already moved beyond project-based design toward a community level model. Continuation of this trend with careful incorporation of elements that align with federal priorities will be integral in any future proposals to access federal funding. Providers in Texas can anticipate this shift and prepare to manage risk and populations, address SDOH and operate in regional networks to achieve quality performance measures. While it remains up to the state of Texas to define the details, these trends have emerged with strong tailwinds within and beyond the 1115 Waiver.

For more information on how to prepare for your organization for upcoming policy and market changes, please contact Allen Miller, Principal, COPE Health Solutions at amiller@copehealthsolutions.com and 310-386-5812.

1 Texas has previously participated in two Medicaid 1115 waivers, the first of which began in 2011 under the Obama Administration approving $29B over five years. In 2017, the program was extended with an additional $25B under the Trump Administration. Industry insiders remain skeptical on the prospect of renewal of another 1115 Waiver.
2 Texas Comptroller. https://comptroller.texas.gov/economy/fiscal-notes/2019/aug/healthcare.php.
3 Texas Section 1115 Demonstration Fact Sheet. https://www.medicaid.gov/Medicaid-CHIP-Program-Information/By-Topics/Waivers/1115/downloads/tx/tx-healthcare-transformation-fs.pdf
4 Speech text available at: https://www.cms.gov/newsroom/press-releases/cms-administrator-seema-vermas-speech-national-association-medicaid-directors-washington-dc
5 While Medicare Direct Contracting contains features that deliberately expand program eligibility to a larger variety of providers than legacy ACO models, it does not restrict MCO participation as DCEs and encourages their participation in the model.