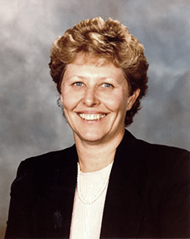 Elvia Foulke, retired as of May 1st 2012 as the Executive Vice President and Chief Operating Officer at Citrus Valley Health Partners.

Elvia received her Bachelor of Science degree in accounting and finance from the University of California at Berkeley. She was honored as a Woman of Achievement by the San Gabriel Valley YWCA in 2003.